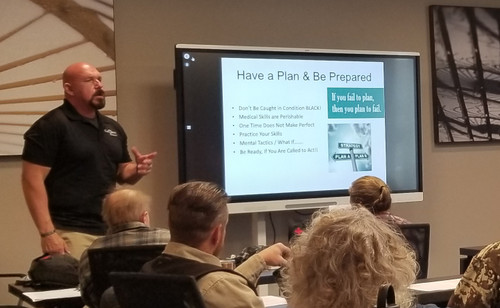 90% of American service men and women who die from combat wounds do so before they arrive at a medical treatment facility. This figure highlights the importance of the trauma care provided on the battlefield by combat medics, corpsmen, PJs, and even the casualties themselves and their fellow combatants.

With respect to the actual care provided by combat medics on the battlefield, however, J. S Maughon noted in his paper in Military Medicine in 1970 that little had changed in the preceding 100 years. In the interval between the publication of Maughon's paper and the United States’ invasion of Afghanistan in 2001, there was also little progress made. The war years, though, have seen many lifesaving advances in battlefield trauma care pioneered by the Joint Trauma System and the Committee on Tactical Combat Casualty Care. These advances have dramatically increased casualty survival. This is especially true when all members of combat units – not just medics - are trained in Tactical Combat Casualty Care (TCCC.)

Combat medical personnel and non-medical combatants in U.S. and most coalition militaries are now being trained to manage combat trauma on the battlefield in accordance with TCCC Guidelines.

This is a 2 day class. Day one is all class room using your IFAK, day 2 is on the range applying the skills you have learned in a stressful environment. Cost of the class is $500 total. Scholarships are available from the First Responder Training Foundation for our first responders.